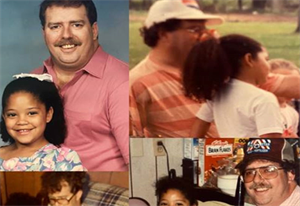 I was adopted by a gay, one-armed white man.

As a black female and by modern definition, I would consider him my very first “white ally.” This concept of white ally-ship became rather trendy, post George Floyd’s death, but has always been a recognizable trait in the black community.

If he were here today, he would likely mock my attempt to put him in this trendy box. He’d probably smile at the concept and simply say, “Love has no color and no sex.” He was light years ahead of his time.

Every Father’s Day, I spend the day in complete nostalgia simply reflecting on how lucky I was to have a dad like him. Moms are often heralded for their value in a child’s life. For me, the hero was my dad, and his name was Ronnie.

Ronnie was brave, ambitious and the most progressive role model I have ever had. The story of how he became my father is truly a love-filled testimony.

In the late 70s and early 80s, Ronnie rode an impossible cancer treatment roller coaster that left him with one arm and a lot of pride. He bounced back and with a new purpose which played out through a fun gig as a bar manager in the gay-friendly Houston neighborhood, Montrose.

Fate introduced my mother Elizabeth and Ronnie a few years into his Houston residency. Elizabeth was a drug addict and alcoholic while pregnant with me. Ronnie listened to much of her life story while she visited the bar and knew that he had to intervene with her plans of an abortion. One day, he simply approached her and said, “I’ll take your baby.”

Elizabeth was African American mixed with Samoan roots and Ronnie was 100% Caucasian. She was a true city girl who loved her fast-paced upbringing in Washington D.C. and thrived in the Houston night lights.

It was an unusual adoption. This was a single parent transracial adoption.

The first recorded transracial adoption was in 1948 when a white family adopted a black child in Minnesota. I don’t know much about Minnesota and how “woke” they were back then, but I can tell you that many Vidor, Texas, residents did not think a homosexual man bringing home a black baby deserved many positive affirmations nor respect. While even the most extreme cases of both racism and homophobia are not classified as psychiatric disorders, they place psychological tolls on our human experience.

Ronnie died when I was barely able to understand the true meaning of death, but I am grateful his residual to my soul. The way I embrace, respect and lovingly support the LGBTQ community reflects his legacy and an intentional commitment. “Ally-ship is not an identity — it is a lifelong process of building relationships based on trust, consistency and accountability with marginalized individuals and/or groups of people,” according to The Anti-Oppression Network.

I can’t imagine that making the decision to adopt me was an easy one. Ronnie did not have a partner; same sex marriage was not yet legal; and he willingly accepted this parental journey as a single father. According to the 2020 United States Census Bureau, “There are 2 million single fathers, without a spouse or partner present, living with their children under the age of 18.”

For all these single fathers, for the devoted fathers all over the world … for my father – I honor you this weekend!

Enjoy a few more Father’s Day stats from the US Census Bureau.

Note: This blog post was written by Lacey Tezino, MHA, PMP, our director of Information Technology. It first appeared on Mind Matters from Menninger, our blog on PsychologyToday.com.