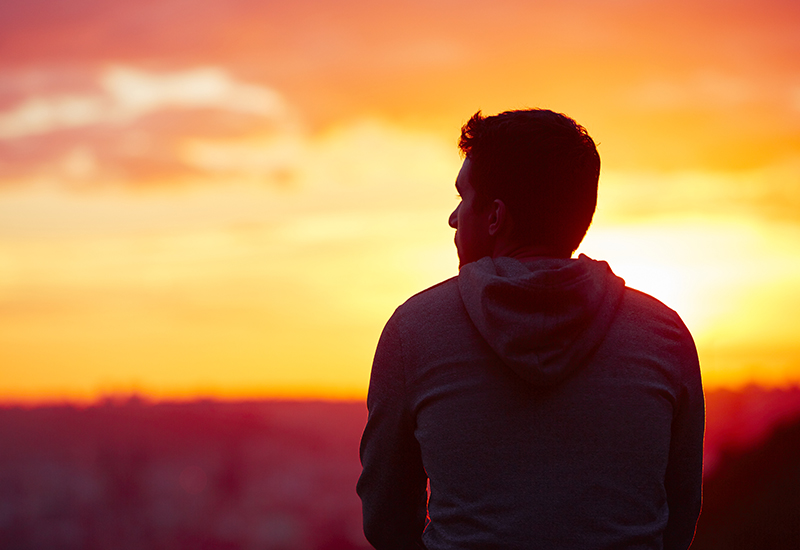 Managing the transition from adolescence to young adulthood is never easy, and it's especially difficult when complicated by a mental health disorder. After years of erratic behavior – and a suicide attempt – one family found answers and a new beginning for their son at The Menninger Clinic. Now, they're sharing their story in hopes of helping other parents who face a similar situation.

As a parent, you always want the best for your children. You want to see them grow, thrive and be happy. But what do you do when your child is hurting and unable to find their way? This was a question we often asked ourselves as our son Justin* struggled through high school and college. We’re grateful that Justin is alive today and credit his survival to the care he received at Menninger. We donate to Menninger because we want to ensure other families like us have access to the same high-quality care.

Looking back, Justin himself will admit that he was a “difficult” child. He was very smart, but also deeply frustrated most of the time. Often, he acted out in school when he got bored. By high school, he was flunking every subject. It was a constant battle to get him to do anything.

At our wit's end, we sent Justin to boarding school. His grades improved dramatically, and he even earned a merit scholarship to attend college after graduation. We were hopeful that Justin’s rocky past was behind him; however, our optimism was short-lived.

During college, he became involved in an unhealthy relationship and began using drugs and alcohol. He was in another downward spiral. He lost his scholarship and returned home to attend a local community college, but his mood worsened. His behavior was erratic, and he started lashing out at us in sudden outbursts of anger. After learning that Justin was self-harming, we attempted to have him placed on a 72-hour hold at a nearby hospital, but our request was denied. Later, he attempted suicide at our home. Thankfully, we discovered what he had done and rushed him to the hospital in time to save his life.

We were relieved when Justin agreed to see a psychologist. On the surface, he seemed better, but it soon became obvious that he was continuing to struggle and self-harm. Although we desperately wanted Justin to get better, we realized that we couldn’t solve his problems for him. His psychologist recommended Menninger. Justin didn’t want to go, but he knew that he needed to. The experience was life-changing for him — a godsend.

At Menninger, Justin became motivated to take care of himself and his mental health. He learned coping mechanisms, and his self-awareness grew by leaps and bounds. Following his treatment on Menninger’s Compass Unit, he spent four months in a step-down program that he had chosen. His confidence and well-being continued to grow.

When Justin told us that he wanted to live out-of-state, we were nervous. It was hard to let go after waking up so many mornings worrying about him, sometimes wondering if he was still alive. Instead of fearing the worst, however, we chose to trust our son. He soon found an apartment on his own and decided to go back to college. He even enrolled in law school, which is something we couldn’t have imagined just a few years ago.

Today, Justin continues to care for his mental health by taking medication and attending therapy. The difference in all our lives since his treatment at Menninger is night and day. We have a good relationship with our son and no longer worry about him 24/7. Most of all though, we know that Justin is capable of caring for himself and his happiness. As a parent, there is nothing more we could ask for.

We hope Justin’s story inspires you to join us in support of Menninger and to help other families find healing.
- Justin’s Grateful Parents