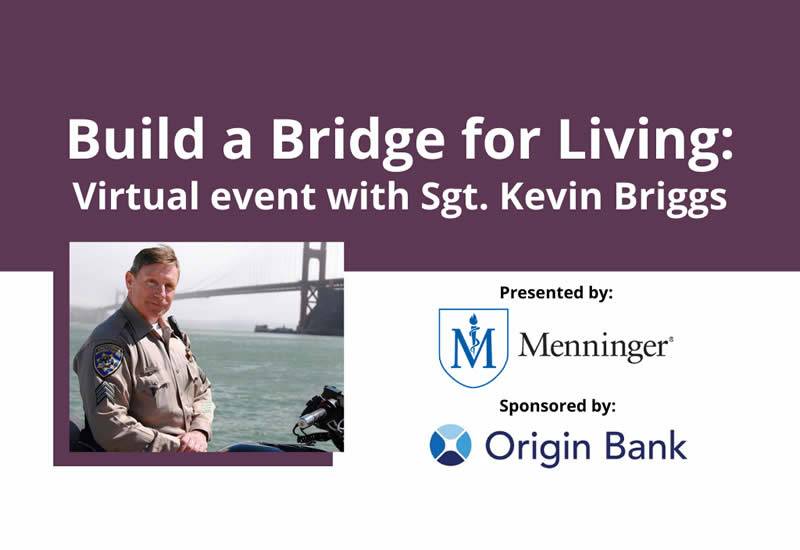 September is World Suicide Prevention Month, and on Wednesday, September 16, Menninger will highlight the need for better prevention efforts during Build a Bridge for Living, a free virtual event featuring Sgt. Kevin Briggs, who has saved hundreds on the brink of suicide at San Francisco's iconic Golden Gate Bridge.

There are more than 48,000 suicides annually in the U.S., yet his efforts are proof that one person has the power to interrupt the hopelessness and desperation that can lead to suicide. Sgt. Briggs will share important stories that demonstrate how one person who listens and makes a meaningful connection without judgment can be a lifesaver to someone in crisis.

Simply register here to save the date and easily join this live presentation at the start of the program.

Sgt. Briggs’ presentation will focus on:

He delivers his message of hope by sharing his personal story and experiences, as well as the tools he developed that can be used by anyone to assist an individual in crisis. His talks are both inspiring and educational.

September 16 also marks the start of Colombo’s second year at the helm of The Menninger Clinic. He will share a few reflections as well as information about Menninger’s expansion and construction plans.

Joining him during the program will be Dr. Patriquin, who will moderate questions submitted by audience members. She leads Menninger’s research on treating suicidal risk.

Treating individuals suffering from the depths of despair has been a hallmark of Menninger throughout its more than nine decades. In fact, co-founder Karl Menninger, MD, spoke often about the importance of hope and listening, two of the building blocks of Sgt. Briggs' proven approach for responding to a person who is intent on suicide.

Hope is a necessity for normal life and the major weapon against the suicide impulse.

About Our Keynote Speaker

After a 23-year career with the California Highway Patrol following service in the Army, Sgt. Briggs retired to dedicate his life to promoting mental health awareness across the globe through Pivotal Points, an organization he founded. He also works with the American Foundation for Suicide Prevention, National Alliance on Mental Illness and corporations.

Sgt. Briggs’ personal story includes being a cancer survivor, overcoming heart issues, divorce, PTSD and depression. He also is a survivor of suicide loss in his family.

The Golden Gate Bridge, which opened in 1937, has been the site for more than 1,600 individuals who died by suicide by leaping off of the famous bridge.

Sgt. Briggs answered an average of four to six calls monthly to aid more than 200 individuals contemplating suicide, which helped him earn the nickname “Guardian of the Golden Gate Bridge.”

Menninger is grateful to Origin Bank, the sponsor of this virtual event.