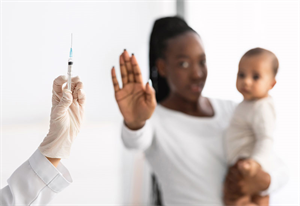 You can’t trust science. At least, that’s what some Black communities believe, and they may be justified.

Most recently, we see Black mistrust in coronavirus vaccinations, with only about half of Black Americans vaccinated, a proportion lower than white, Hispanic and Asian American counterparts. The disparities are large, and this mistrust isn’t without reason, nor is it confined to only vaccinations. Black Americans don’t trust medical and research communities, and history tells us why.

In 2007, author Harriet Washington published Medical Apartheid, the first and only exhaustive history of medical experimentation on people of African descent. The former Tuskegee University research scholar explored detailed accounts of historical abuse and American experimentation on the Black community. Reflecting on her work today, we see that Washington contextualized long-observed declining rates of African American participation in clinical research.

The book explores one of the most infamous cases of medical racism in American history: the Tuskegee syphilis study.

From 1932 to 1972, the Centers for Disease Control (CDC) manipulated 600 impoverished Black men into participating in syphilis experiments without informed consent or proper documentation. And when hundreds of men tested positive for syphilis, scientists informed participants that they were being treated for “bad blood.”

Researchers administered penicillin to a select group of men, and even after there was clear evidence of the treatment’s efficacy, scientists continued to deny antibiotics to many infected men. More than Black lives, scientists prioritized observing the progression of syphilis, which resulted in blindness, deafness, mental illness, heart disease, bone deterioration and death. Over 100 Black men died, along with their wives and children.

Tuskegee painted dark strokes on American medical history, and while it was only one of many unethical medical experiments on Black communities, the study lingers in Black American minds and influences their research participation today. One study aimed to identify barriers to African American research participation; although researchers weren’t looking specifically for a causal link, they found mistrust and under-participation connected to the Tuskegee syphilis study.

In the 2015 study, 70 African American participants in 11 moderator-led focus groups conversed about scientific research and healthcare. Despite answering general questions, the groups focused on two themes.

The first theme was Tuskegee. Participants — regardless of gender, education, income and even prior research experience and expertise — traced their mistrust to the history of medicine. While many recognized the importance of research for societal well-being, horrific experimentation deeply rooted in the histories of Black communities and American science couldn’t be ignored. Participants recalled these historical studies, tying their knowledge to their strong suspicion of science.

Rationally, after years of deception and exploitation, participants argued that they simply don’t trust researchers. One participant noted that Tuskegee “becomes a symbol of these two portions of my existence, and it becomes a way for me to answer the question, why? So me participating in something else that might be like [Tuskegee], why would I do that to myself? It happened then, and it could happen now. Current clinical research ignores its dark history, and as a result, Black Americans fear a repeating one."

A racist clinical history affects Black people’s everyday decisions. Another participant recalled an experience in a driver’s license bureau: Every Black person who came in refused to be an organ donor, while every other person opted in without hesitation. When asked, the participant immediately declined. She noted, “This thing in my head was telling me they will misuse my organs. I don’t even know why I was so emotional.” While donating one’s organs seems to have little, if any, correlation to Tuskegee, the mistrust is all the same. For Black Americans, medical trauma crosses boundaries of space and time.

The second common theme across groups was the term guinea pigs. “One of the reasons most Black people are reluctant to get involved is suspicion. We’ve been kind of brainwashed, and we’re guinea pigs,” said one participant. Since the beginning of American science, Black bodies have been disposable. In Tuskegee, clinicians targeted poor sharecroppers as the perfect study subject. Black Americans rightly doubt current-day scientists’ integrity, especially when they view medicine through a historical lens.

“And it goes back if you find something, are we ever going to see it? So truly, why does my participation really matter for anything? If it’s not going to produce a product that I’m going to see, why should I be one of the study participants?” Participants believe research conducted in their community has no positive results for their community. Racial health disparities are evident across medical fields, with Black Americans at a higher risk for heart diseases, stroke, cancer, asthma, influenza and pneumonia, diabetes and HIV/AIDs. This fact makes it difficult to see how the participation of Black subjects results in any benefit for Black Americans.

Research indicates that 81% of African Americans are familiar with the Tuskegee syphilis study, and 49% are unwilling to participate in medical studies. We can’t blame them. Scientists, researchers and clinicians have deceived the Black community in the past and may continue to in present-day American science.

Researchers who commit to productive change and overcompensation can and must earn, but not expect, the respect of Black Americans. It’s not easy, but possible.

First, invest. Invest time, resources, and effort in rebuilding credibility within marginalized communities. Through outreach initiatives, increased effort in recruiting diverse peoples and education regarding informed consent, the science community can take steps to restore trust in clinical care that has been lost for centuries.

Second, prioritize transparency. Recognize and acknowledge past and present shortcomings in research and treatment. By reporting past demographics and sharing plans for bridging disparities, clinical spheres need to be honest about their failure for representation and create a dialogue on how they will compensate for their historical and continued lacking.

Third, bolster accountability. Hold everyone — researchers, data analysts, clinicians, readers — accountable. They all bear the responsibility of creating a more inclusive science. All must speak out when they’re concerned about underrepresentation, mistreatment and ignorance. Point out disparities, and encourage efforts to produce representative and diverse participant pools. Commit to bringing scientific justice to underserved and historically marginalized communities. Whether a scientist, participant or just someone interested in creating progressive change, urge research to be better.

Through it all, scientists must understand Black mistrust and honor Black pain. Prioritize hurt communities and listen. Hear and learn from victims, and do what they need to rebuild relationships and trust. With consistent and genuine effort, the scientific community can reform a broken research and science system. Time doesn’t heal all wounds, but change may.

Note: This content originally appeared on Mind Matters from Menninger, our blog on Psychology Today.