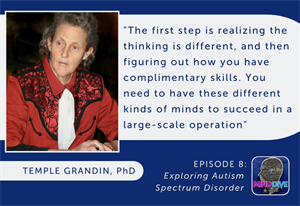 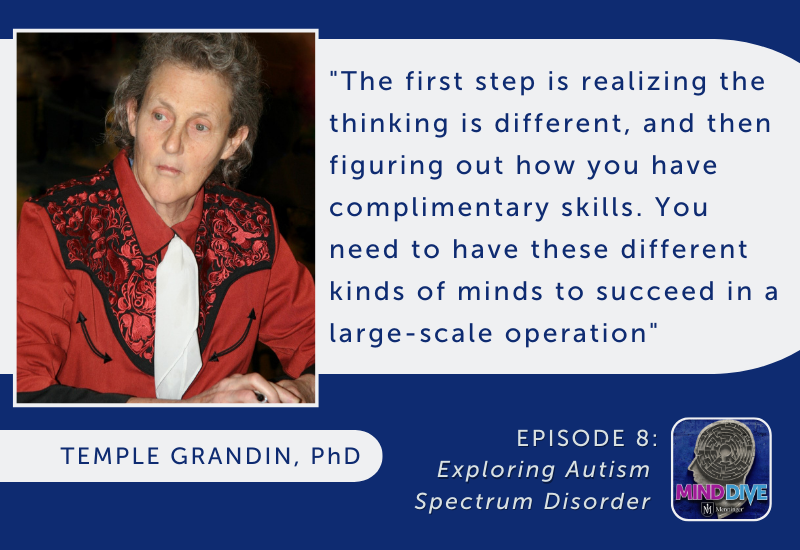 Not all great minds think alike. The path to understanding how to best nurture an autistic individual often begins with understanding their way of thinking. Temple Grandin, PhD, poses that a great disservice is done to both society and the individual when we fail to focus on the strengths of those with autism spectrum disorder (ASD), limiting their lifestyle based on perceived weaknesses instead.

Join this episode of the Mind Dive podcast alongside hosts Robert Boland, MD, and Kerry Horrell, PhD, as they discuss with Dr. Grandin the ways clinicians, parents and other role models can better advocate for autistic children and nurture growth for a productive and fulfilling future. Also explored are the notable differences between object visualization and pattern visualization and how this relates to the understanding of neurodivergent thinking.

“The first step is realizing the thinking is different, and then figuring out how you have complimentary skills,” said Dr. Grandin, using her own experiences on a food processing plant as an example. “You need to have these different kinds of minds to succeed in a large-scale operation.”

Dr. Grandin is a world-renowned author, inventor, Doctor of Animal Science and expert of both animal behavior and autism. Diagnosed with autism herself, she is one of the first individuals to write of her personal experiences and is a leading advocate for autism rights and the neurodiversity movement.

Dr. Grandin’s best-selling books on autism and the workings of the mind include Thinking in Pictures, The Autistic Brain, Navigating Autism: 9 Mindsets for Helping Kids on the Spectrum, and Visual Thinking: The Hidden Gifts of People Who Think in Pictures. She has received many awards for her advocacy and scientific work, including an induction into the American Academy of Arts and Sciences and being named as one of Time Magazine’s Most Influential People in 2010.