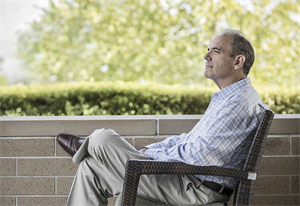 Suffering from the mental illness known as depression, I had stayed afloat and outwardly successful for twenty years with medication, therapy and ongoing psychiatric care. But this time was different.

The pain and misery were too much to endure, and I was ready to take my own life despite my doctor’s oft-repeated counsel that suicide is a permanent solution to a temporary problem. I was convinced that I was beyond help.

Several months earlier I had recognized already that I was too impaired to continue working and had taken an indefinite leave of absence from employment. I compounded this disconnect from professional life by isolating myself from social contact as well, too embarrassed to tell friends and colleagues how miserable I was for fear of suffering the stigma that so often accompanies mental illness. I had become, quite literally, a hermit, even declining the support and companionship offered by the small number of individuals aware of my condition.

I had an exit strategy, and I was ready to implement it.

How could things have gotten this bad?  I can paraphrase the clinical explanation: My genetic predisposition to depression had coupled with a pileup of stress (including divorce and several successive major illnesses, but the list was long) to precipitate in me a textbook example of treatment-resistant, major depression. It is a description, of course, that hardly conveys the state of hopelessness and anxious misery that brought me to the edge of the abyss.

The turning point – and the beginning of the road back – came when my doctor could do nothing more in terms of treatment than recommend I admit myself to a psychiatric hospital. That advice, along with my desire to avoid leaving my daughter a legacy of suicide, saved my life and allowed me, over time, to recover.

Lucky enough to live in Houston, I had ready access to The Menninger Clinic’s Professionals Program, where I underwent two months of inpatient treatment followed by many more months of intensive outpatient care by therapists, psychiatrists and support groups.

“Inpatient treatment” sounds daunting, even frightening, but in fact its emphasis was on education about depression and other mental disorders (learning how to recognize and to manage the disease, for example), and on acquiring the tools one needs to maintain wellness later on, to address future recurrences and to understand how to prevent these from becoming acute. They are tools that work – and that have continued to make the almost-inevitable recurrences I’ve had to confront manageable.

With depression, recovery is not just a long and painful process. It is one that is often ongoing for life. At first, even things as basic as hygiene, nutrition and exercise seem impossible to achieve and maintain. One is also challenged to use the tools one has learned during hospitalization to “retrain” one’s brain. Little by little it becomes possible to feel more and more like oneself again, and to look to achieving a whole succession of milestones.

One of the biggest of these is the one of returning to work. I did this very tentatively, beginning six months after my discharge and working only part-time on matters normally delegated to young associates or support staff. Little by little I tackled more challenging tasks, rebuilding my confidence with each success until I could prepare complex documents and meet critical deadlines.

Simultaneously, I was reemerging socially – a process that can be just as challenging – although here I enjoyed a number of positive surprises. As I began – guardedly at first – to disclose my medical condition and whereabouts during my absence, I met with nothing but support and compassion from family, friends and colleagues.

What I had concealed so meticulously became a non-event once out on the table. Even more surprising was the number of people who told me about their own experiences with depression, or those of their friends and family members. In short, my fears in this regard had been unfounded.

To my utter amazement, I was beginning to feel normal and to really enjoy life. I could take on a new case and handle it with increasing ease. I resumed and enjoyed social activities that I had actively avoided during years of mental illness. I renewed old friendships and formed new ones, and through volunteer work began helping others who were suffering in the ways that I had.  No question – I had emerged from the darkness.

Today I’m doing the best professional work of my life. I’ve managed to launch a deeply satisfying late-career change. I’m in better health mentally and physically than I’ve been in over two decades. I am happily remarried, socially engaged and alive again. Indeed, and strange as this may sound, I am enjoying a fullness of life that I am convinced is a result, in part, of having endured and successfully beaten a life-threatening illness.

Robert Loiseau is an attorney and businessman now engaged in executive leadership of nonprofit organizations along with continued involvement in volunteer work.